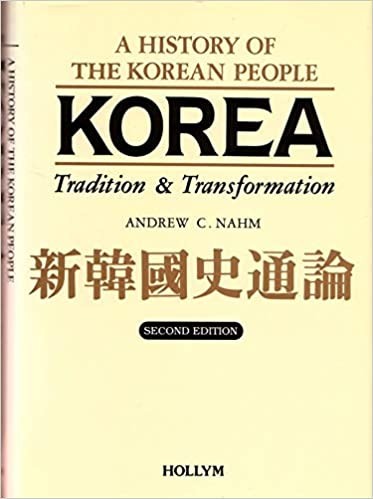 This is the first comprehensive English-language history of the Korean people, offering Western readers a synthesis of the latest and best scholarship on Korean history and culture from the earliest times to the present.

Prof. Nahm's work presents a fresh and scholarly: analysis of the origins, the growth and never-ending process of changes in political, economic, social and cultural patterns of the Korean society throughout the ages, as well as historical and contemporary interactions of the Korean people with their neighbors near and far.

The strength of the book lies in its balance. Unlike most other Korean history books, this book covers all aspects of the history of the Korean people–their art, literature, religion, and political, economic and social experiences from the ancient times to the present. It is noteworthy that, for the first time, the recent history and various aspects of national development of both North and South Korea are dealt with in the book.

"I am happy to see Professor Andrew C. Nahm's Korea: Tradition and Transformation in print after many years of preparation. Professor Nahm is one of the most experienced teachers of Korean History in the United States and this volume reflects his awareness of a crying need for a comprehensive history of Korea for college level courses as well as for the general reading public. It is a timely and welcome addition to the steadily, but painfully slowly, growing list of English language surveys of Korean history. I am particularly pleased that the last four chapters deal with the eventful postwar years which have not been adequately covered in most other history textbooks despite their obvious and compelling importance."
Han-kyo Kim, Professor of Political Science, University of Cincinnati

PART I. The Shaping of Korean Tradition

PART II. The Transformation of Korea

3. The Kingdom of Koryo: Internal Development and External Pressures
4. The Yi Dynasty and Confucianized Korea
5. The End of Isolation, Modernization and the Growing National Insecurity
6. The Demise of the Yi Dynasty and Korean Independence

PART III. Korea under Japanese Rule and the Fight for Freedom

7. Korea Under Japanese Colonial Rule
8. The Liberation and Reconstruction Movements at Home and Abroad

9. Korea Under the Allied Occupation
10. The Two Korean States and the Korean War
11. Post-War Korean Political History: The Struggle for Democracy
12. National Development and Modern Transformation in Korea
13. North Korea After the War
14. Post-Korean War North-South Relations: Prospects for Reunification

Die zwölf Taekwondo Hyongs. Die...
€12.80 *
Viewed
This website uses cookies, which are necessary for the technical operation of the website and are always set. Other cookies, which increase the usability of this website, serve for direct advertising or simplify interaction with other websites and social networks, will only be used with your consent.
Decline Accept all Configure