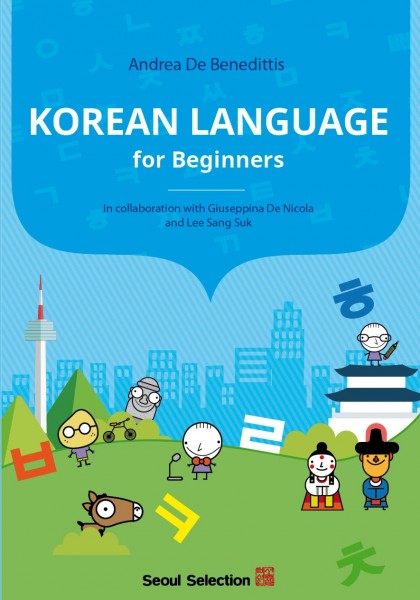 Description Evaluations 0
Description
This book is a complete guide for people who want to learn the Korean language, starting from... more
Close menu
Product information "Korean Language for Beginners"

The writer is a non-native speaker who started learning the language from ZERO, just like you and spent years in Korea trying to reach a better level of proficiency in Korean.

After a few weeks of study, you will study to recognize words, make sentences, and have simple (but miraculous) conversations with other Korean speakers!

How to Use This Book

Unit 4 Do you study?   The topic particle 은/는  / The formal level of speech -ㅂ 니다/습니다  / The nominal predicate in an affirmative sentence

Unit 5 What is this?   Demonstrative adjectives and pronouns / The particle 의 / Lexicon: names of countries / Personal pronouns / Interrogative pronouns

Unit 8 When is your birthday?  The particle 을/를  / Cardinal numbers / The particles ~부터/~까지

Unit 11 I study hard!   The particle 에서 / The semiformal level of speech for verbs with stems ending in ㅎ and the verb 하다 / Lexicon: the colors / Adverbs / Verbs ending in 하다

Unit 12 What does the professor do?  The semiformal level of speech for verbs with stems ending in ㅅ  /  The particle (으)로 / The honorific form, first part

Unit 13 What’s your name?  The short negative form using 안 or 못 / The honorific form, second part / The particle 에게서 and 한테서 / The exhoratative form in the formal level of speech (으)ㅂ시다

First Step in Korean for Spanish (with CD)
€21.90 *
Customers also bought
Customers also viewed
Viewed
This website uses cookies, which are necessary for the technical operation of the website and are always set. Other cookies, which increase the usability of this website, serve for direct advertising or simplify interaction with other websites and social networks, will only be used with your consent.
Decline Accept all Configure