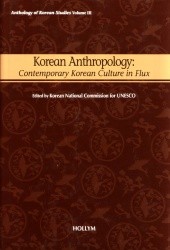 Korean anthropology holds a unique position in the field of anthropology, having first developed with native scholars studying native culture under the prevalent influence of cultural and social anthropology, rather than with the past western practice of studying the Other. Since the 1980s, several attempts have been made to examine Korean culture from different points of view, such as political economy and area studies. This trend is visible in the articles contributed to the Korea Journal over the past forty years. While the early articles focus mainly on Korean shamanism and folklore, the emphasis shifts in the latter half to more diverse subjects such as Koreans abroad and changes in Korean communities under the social, economic, and political influences of the modern times.

Articles in Part I discuss different ways of understanding Korean culture including traditional conceptualization and utilization of nature and living space, and representations abroad. Part II looks at the changes and continuities in Korean communities and beliefs under the social and political influences of modern Korea, ranging from Saemaeul Movement, religious conflicts, and marriage customs. Part III focuses on Korean women in ""patriarchal"" Korean society and the male-female relationship in contemporary Korea. Among featured subjects are women on Jeju-do island, female workers in multinational corporations, and family relations. Shamanistic rituals and fortunetelling, the main theme of Part IV, are still prevalent in Korea alongside modern medicine and cutting-edge technology despite the conflicts and confusion brought on by the rapid industrialization and westernization of Korean society. While some traditions have been discarded, other have been retained in a diff! erent or compromised form, This brings us to the final Part V which explores how various social relationships are formed and maintained within modern Korean society: men and women continue to rely on kinship and social ties to survive in a highly competitive and centralized society.

I. How to Understand Korean Culture

· Choi, Hyup. Representing Korean Culture in America: A Case Study of the Korean Ethnological Collections at the Smithsonian Institution

· Choi, Chang-jo. Study of How Koreans View and Utilize Nature

· Kirn, Kwnag-Ok. The Communal Ideology and Its Reality

· Oh, Myung-Seok. Peasant Culture and Modernization in Korea: Cultural Implications of Saemaul Movement in the 1970s

· Cho, Myung-Rae. Flexible Sociality and the Postmodernity of Seoul

· Kendall, Laurel. A Noisy and Bothersome New Custom': Delivering a Gift Box to a Korean Bride

III. The World of Women

· Park, Boojin. The Utilization of Residential Space and Family Relations: The Case of the Korean Rural Farnily

· Yi, Eunhee Kirn. 'Horne is a Place to Rest': Constructing the Meaning of Work' Family, and Gender in the Korean Middle Class

· Janelli, Dawnhee Yim. The Strategies of a Korean Fortuneteller

V. Too Modern Too Soon?

· Na, Eun-Yeong. Changes in Values and the Generation Gap Between the 1970s and the 1990s in Korea

· Han, Kyung-Koo. The Politics of Network and Social Trust

· Lee, Jaehyuck. Society in a Vortex?

Korea: Tradition and Transformation
€69.00 *
Viewed
This website uses cookies, which are necessary for the technical operation of the website and are always set. Other cookies, which increase the usability of this website, serve for direct advertising or simplify interaction with other websites and social networks, will only be used with your consent.
Decline Accept all Configure