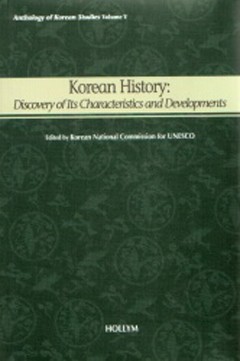 Beschreibung Bewertungen 0
Beschreibung
Japanese colonialism robbed Korea of its opportunity to modernize by its own volition. Imperial... mehr
Menü schließen
Produktinformationen "Korean History: Discovery of Its Characteristics and Development"

Japanese colonialism robbed Korea of its opportunity to modernize by its own volition. Imperial Japan also propagated a false image of Korea to the outside world from the moment it went to the war against Russia in 1904. Claiming that Korea was a source of calamity in East Asia, the Japanese insisted that their occupation of Korea was inevitable and justifiable. While the Japanese buried Korea's achievements of self-modernization prior to the Russo-Japanese War, they sustained the false idea of Korean incapacity by negatively representing Korean history and racial characteristics. Japan forced annexation of Korea brought about not only distress to the lives of Koreans but also serious distortions of Korean history.

Since the Liberation of 1945, Korean historians have spent much time restoring the true history of Korea while criticizing Japanese colonialist historiography. However, recovering losses already incurred during the forty years of Japanese forced occupation proved to be extremely difficult. Subsequent unstable political situations such as ideological conflict, national division, war, poverty, and dictatorship made consistent academic activity nearly unsustainable. Stable academic activity in Korea did not settle into place until the late 1960s, when Korean studies began to grow and expand. Many articles in this volume, written in the 1970s and later, would not have been possible without that initial boom.

Korean historians, however, are still not free from the concept that their first task is to overcome Japanese colonialist history. Japan damaged and distorted Korea's history to such a serious extent that it was virtually impossible for scholars to construct a true image of Korea. Moreover, Western scholars made this task even more difficult as they followed in the footsteps of Japanese colonialist historians. Considering all these obstacles, achievements in the field of Korean history over the past 30 years have been quite remarkable.

This volume, Korean History: Discovery of Its Characteristics and Developments, presents 29 original articles carefully selected from the Korea Journal that cover all periods of Korean history. The articles, spanning various fields and chosen under the guidance of Professor Yi Tae-Jin, are arranged into five major periods: 1) Ancient, 2) Goryeo (First Medieval), 3) Joseon (Second Medieval), 4) Modern, and 5) Colonial and Post-Liberation. Though the compilation aims to cover a wide range of fields within each period, it should be noted that the articles published in the Korea Journal were originally limited in number and subject. Therefore, it cannot be said that this selection covers all necessary aspects of Korean history presently reflected in the advanced level of current Korean historiography. There are myriad of interesting and important articles worthy of being introduced to Western academic societies through English translation. Still, this volume serves as a display of the endeavors of Korean historians to correct the distorted image of Korean history, and is also meant to encourage and promote the English translation of a more comprehensive surveys of Korean history.

I. Formation of Korean Nation and Ancient Period

· Noh, Tae Don. Theories about the Formative Period of the Korean People

· Kim, Hyun-koo. A Study of Korean-Japan Relations in Ancient limes: Centering on the Taika Reforrns and Formation of Cooperation among Shilla, Japan, and Tang China

· Cheon, Kwari-wu. A New Interpretation of the Problems of Mimana

· Song, Ki-ho. Several Questions in Studies of the History of Palhae

· Lee, Woo-sung. Confucian Politics in Choson Period and the Existence of Sallim

· Yang, Bo-kyung. Perception of Nature in the Choson Period

· Lee, Yong-ho. The Socio-economic Background and the Growth of the New Social Forces of the 1894 Peasant War

· Shin, Yong-ha. The Revolutionary Movement of the Tonghak Paesant Army of 1894: Seen vis-a-vis the French Revolution

· Kang, Man-gil. The Nature and Process of the Korean National Liberation Governent during the Japanese Colonial Period

· Yi, Kyun-yong. Inaugurations of the Shin'gan-.hoe Society and Establishment of its Chapters

· Do, Jin-Soon. Deduction of the National Division and the Prernise of Reunification of the Korean Peninsula