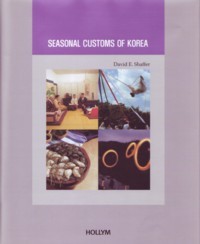 In this fast-paced, rapidly changing world, Korea has not been unaffected. Many long-observed seasonal customs that were still practiced a few short decades ago have now disappeared or are quickly disappearing. (Children prefer computer games to kite-flying and top-spinning on Lunar New Year's Day.) Although a custom may no longer be explicitly followed, knowledge of it has more importance than merely satisfying one's inquisitiveness; the essence of the past manifests itself in the present. Korea's long-observed seasonal customs of the past do still, however, have considerable influence upon the formation of the behavioral and attitudinal patterns of present-day society. In this way, customs of yesteryear live on to influence the present, and ultimately, the future. Most seasonal customs have been formed and developed as a result of the cycles of agriculture, and thus, comprehensively reflect the people's everyday life. As seasonal customs have been formed around unified experiences of people's lives, Korea's traditional culture has been transmitted through deeply embedded teachings, within which the sentiments of the people have also been preserved.

David E. Shaffer has lived and worked in Korea for many years. He is a professor of the English Language Department at Chosun University in Gwangju, South Korea, where he has taught since 1976. Before relocating to Korea in the early 1970s, Dr. Shaffer lived in Pennsylvania, in the northeastern United States. He graudated from Pennsylvania State University and completed his graduate studies in English linguistics at Chosun University. Since the early 1990s, Dr. Shaffer has been active as a columnist for a number of Korean periodicals with nationwide readership. He has written on the English and Korean languages, as well as traditional and modern Korean culture. In 1993, he was the recipient of the Modern Korean Literature Translation award in poetry. Dr. Shaffer is an active member of numerous academic associations in Korea, sitting on the executive boards of Asia TEFL, Korea TESOL (Korea Teachers of English to Speakers of Other Languages), and GETA (Global English Teachers Association).