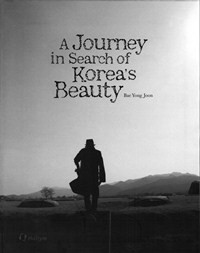 Unfledged yet Earnest Record of a Journey in Search of Korea's Culture: "A Journey in Search of Korea's Beauty" was a yearlong project that Bae Yong Joon undertook in order to learn more about traditional Korean culture from the unfledged yet earnest point of view of one Korean, and to record in a down-to- earth way what he learned and felt in the process. He chose 13 subjects he has been interested in out of the traditional Korean culture and folded into six categories. This book is intended not only for foreign readers who would like to learn more about traditional Korean culture but do not have easy access to it, but also for Korean readers as well who are in search of this country's beauty. 1. Staying: In this chapter, the author introduces Koreans' staple food, including bap and kimchi, and emphasizes the beauty of hanbok, the traditional clothing, often quoted as beautiful lining. Not only that, he focuses on colors of the hanbok and guides the readers to the world of natural dyeing he has experienced. 2. Leaving: Along with 10,000 year lasting lacquer craft and 1,000 year lasting hanji (the Korean traditional paper), we learn about traditional pottery making and about Buddhism that holds crucial part of Korean history. The writer meets artisans and monks to seek craftsmanship and courtesy that handed down through ages. 3. Letting Go: On an empty site, once enjoyed great honor of the great Kingdom, we reconsider past and present and make plans for future. 4. Contemplating: King Sejong the Great hoped for all the people to be able to read and write. We recollect dreaming King's invention, hanguel, and tangible assets from National Museum of Korea. 5. Returning: Compared to world famous wine, Korea's traditional wine takes no lower position. We take a look at traditional liquor and hanok, the traditional Korean housing which is built based upon human engineering. 6. Leaving, Once Again: The last chapter contains beautiful photographs taken by Bae Yong Joon during his journey.

Bae Yong Joon is one of East Asia's foremost actors and an ardent supporter of intercultural communication and exchange. For Bae Yong Joon, staying in conversation with our past is important for the future of humanity, and this book is a creative and heartwarming record of what he has gained from that conversation. Bae Yong Joon made his acting debut in 1994 on the KBS television series, Salut D'Amour (Love Greeting), and rose to stardom with his role in the 1995 series, A Sunny Place of the Young. Having established his acting career through a number of movies and television shows, Bae Yong Joon became an international megastar with his role as Jun-sang on the 2002 series Winter Sonata.