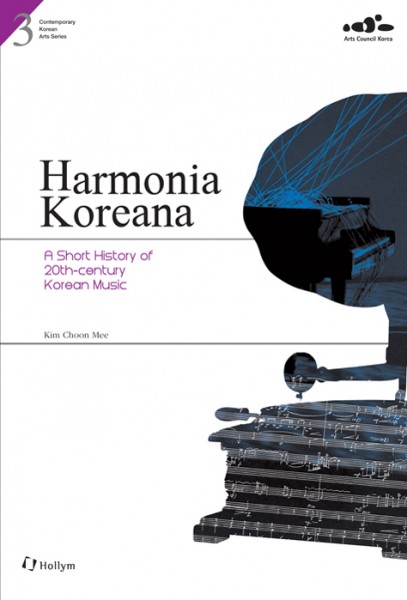 Harmonia Koreana: A Short History of 20th-century Korean Music is a brief overview of how Western classical music was introduced and developed in Korea. This book tells about the distinguishing features of the Korean composer's musical work in general and goes in to more depth on several of modern music's most important compositions.

To understand 20th century Korean music, it is necessary to examine how Western classical music took root in Korea during the period between the late 19th to the early 20th centuries, as this formative period involved the incorporation of Western music sometimes in its entirety, and at other times in the form of adaptations that created a new style. Since its introduction, Western classical music enjoyed growing prosperity at the beginning. However, composers' creativity were oppressed under the Japanese colonial rule and successive Korean war followed by political and social turbulence. Through harsh environments, a closer look into specific works demonstrates that Korean composers always sought to internalize, or "Koreanize," imported techniques to reflect Korean sensibilities, including the individual artists' personal styles.

From the late 1990s, however, Korean composers began accepting and recognizing 20th century Korean music as a new musical legacy of their own, while enjoying greater freedom to choose their musical languages. Additionally, they have become more personally motivated to write music, bringing more diversity into contemporary Korean music. Now, at the dawn of the 21st century, Korea is ready to produce composers with unrestricted inspiration and mature musicality.

02 Western Classical Music in Korea after Independence
Following the division of the Korean Peninsula, however, some composers defected to North Korea and had tried to write music that reflected the Korean society of their times while composers who chose the South pursued music for music's sake, which did not concern itself with social issues.

03 The Full Bloom of Modern Music in the 1970s
In 1969, the installment of the Seoul Music Festival under the slogan "Our Music, by Our Hands" contributed to discovering talented young musicians through commissions and contests. On this rich soil, modern music enjoyed a heyday in Korea in the 1970s as a number of Korean musicians returned home from Germany.

04 The Search for Identity of Contemporary Korean Music
In 1981, a group of composers raised a question about the identity of contemporary music, which they thought represented a culture radically different from the historical reality with which they were faced at the time.

06 Creative Activities in the Mid-1990s
Scholars from the communities of both traditional music and Western-style music have more opportunities to meet with each other and narrow the gap between them by sharing common interest in their respective original works.

07 Leading Young Composers in the New Century
We will look into some remarkable composers at home and abroad who have come into the spotlight since the beginning of the 21st century in this chapter.